The final of this year's 3rd and 4th Class Hurling League took place over in the College field today in bright sunshine. It was a very tight and competitive game which either side coulld have won. Congratulations to Jack and his team as winners today. Congratulations to Ruairi for winning "Player of the Tournament". Many thanks to Mr Carroll and Mr Gleeson for coordinating the league this year. 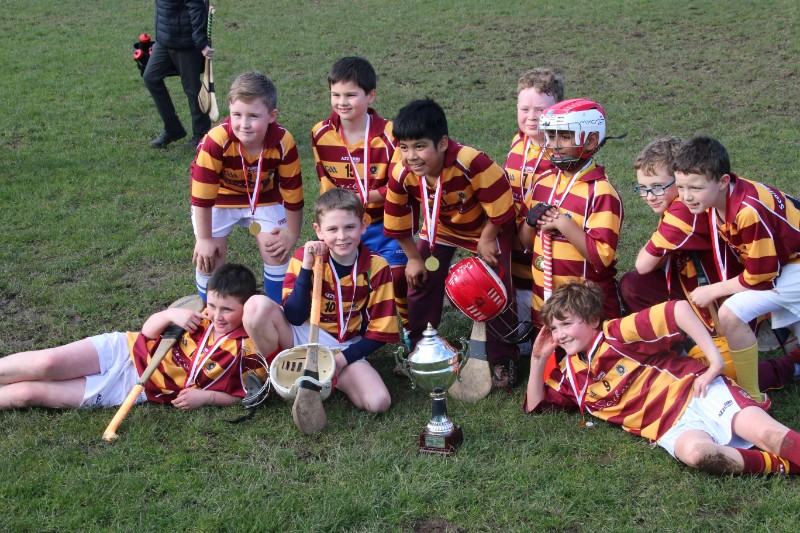 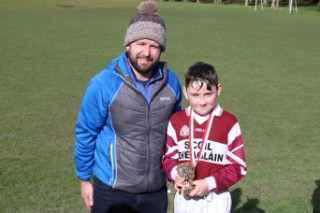 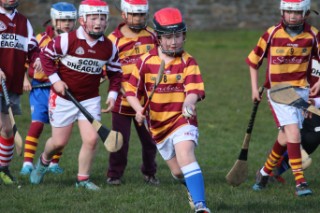 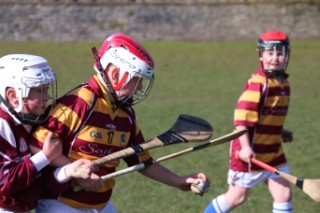 A Bridge too Far

You can’t always get what you want, as the song goes, and so it proved on a difficult afternoon for a St Declan’s side as they met an immovable object in the shape of a formidable Ballygunner outfit in Walsh Park. A good start was needed and what unfolded was encouraging, as St Declan’s playing against the wind in the first half, more than held their own for the first period of the game. Adam Finnerty continued his form of late leading from the front whilst both Noah O’ Brien and Bradley Keoghan were busy throughout the early stages. Indeed St Declan’s will possibly rue some goal chances in the first half with plenty of ball going into their full forward line but the final pass or bounce of the ball just went astray at the last hurdle. Ballygunner kicked some fine scores and it took two excellent pointed frees from midfielder Noah O ‘Brien to keep St Declan’s in touch and still believing. As half time approached , Ballygunner assumed control around the crucial middle third and found some late points easy to come by to leave the scores at the break 0 -06 to 0 -02 in their favour.

With the wind and some rallying words in their sail, St Declan’s once again started brightly as they searched for the goal that might turn the tide of this contest. They were driven on by the likes of Cillian Sheridan and Darragh Doyle who fought bravely to secure a foothold in the midfield battle but as a long ball entered the St Declan’s goalmouth they were about to be dealt a hammer blow. Confusion reigned as the ball failed to be cleared from the square and in what seemed like slow motion was scrambled over the line to raise the green flag for Ballygunner. What was a difficult task now became almost impossible but you wouldn’t have thought that from the reaction of the St Declan’s team who to their credit never gave up. They ran and tackled and blocked until the bitter end, personified by an amazing passage of play as the final whistle neared. Within seconds of each other, Adam Kearney pulled off what can only be described as a save of the season contender and Josh Paul, with no regard for his personal safety, launched himself at the feet of a Ballygunner attacker to block a shot that was destined for the top corner. Brave to the end.

An excellent campaign came to a disappointing conclusion and there was no doubt that the better team won on the day but the boys can be very proud of their efforts throughout. They say sport doesn’t build character, it reveals it. It revealed plenty today. 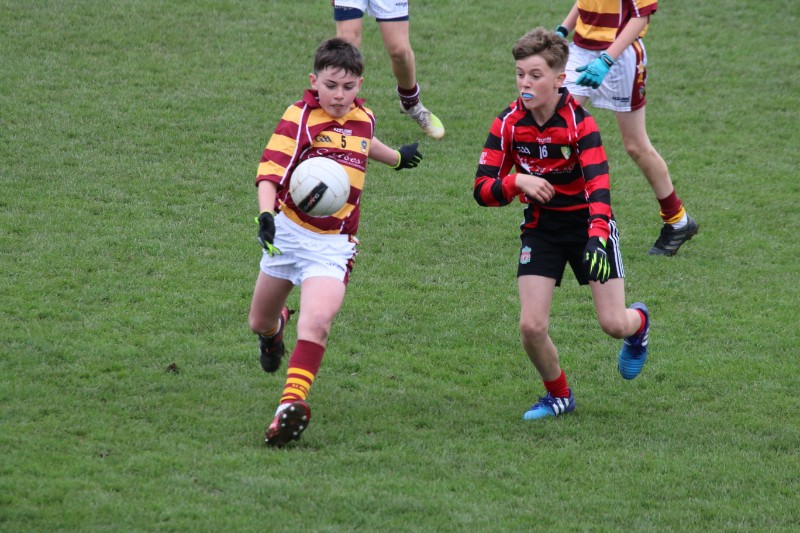 Never Judge a Book by its Cover!

An enthralling contest between two evenly matched teams in a windswept Cleaboy may have been short on scores but it was big on character and no little entertainment for the spectators in attendance. St Declan’s with the backing of a strong breeze began their first half endeavours slowly and it was the opposition who seized the initiative to beguile the conditions. St Stephens raced into an early lead and at that stage of the proceedings were well on top, particularly in the middle third, with some excellent fielding from their midfield players especially. St Declan’s managed to settle down with a well taken point from a free by midfielder Cillian Sheridan to level the scores midway through the half.  An impressive St Declan’s rear guard marshalled superbly by messrs Adam Finnerty and Nathan Collopy started to dominate their habitats and the game was now been played mostly in St Stephen’s territory.

However, Mother Nature continued to have her say as St Declan’s struggled with the elements and failed to take advantage of some good chances created. As the minutes ticked away towards half time, a huge moment in the game was about to unfold. On a rare foray into the danger zone, St Stephen’s manufactured a terrific goal chance which looked destined to rattle the net only for a fine intervention by St Declan’s No.1 Adam Kearney who reacted quickest and somehow managed to smother the shot and clear the danger. A one all score line may have been more suited to the RSC on a Friday night but fortunately there was plenty more drama in store and as the whistle sounded for half time St Declan’s must have thought that their chance of progressing to an Eastern Final had gone with the wind!

The second half began as the first had unfolded with both teams wrestling for possession and that vital score to swing the momentum in their favour. Some positional changes by St Declan’s seemed to have done the trick with Darragh Doyle, Noah ‘O Brien and Jack Waring now more prominent from open play. Indeed, it was a curling left footed effort from Noah ‘O Brien that very nearly broke the deadlock as his free was somehow tipped onto the crossbar and scrambled clear when a goal looked more likely. One thing was certain, a goal was going to land the decisive blow and St Stephen’s had their chances as well, but the Iron Curtain of Sean Keane, Adam Finnerty and Josh Paul could not be breached. Possession was proving hard to sustain for both teams as the tackling and intensity of the contests increased all over the field. Nobody was in any doubt that this ferocious battle was going to go down to the wire.

Just as it looked like a winner could not be found, in an instant and a flash of brilliance the game was over. Noah ‘O Brien delivered a great ball deep into the full forward line where Colm Lafford and Luke McCarthy were beginning to show their class. The St Stephen’s goalkeeper managed to bravely parry the ball away but as it bounced around the square, Colm Lafford swivelled and volleyed the ball into the net for the goal St Declan’s richly deserved.  A finish no doubt the Gooch himself would’ve been proud of!  A brave St Stephen’s team could only be applauded for their efforts throughout, but to the victor go the spoils and to the sharpshooter Colm Lafford, the glory.

Congratulations to our School Athletics team who competed in the Waterford Primary School's Cross Country Event at the RSC today. All 37 boys from 1st to 6th Class gave of their best and at the end of the day we were awarded the cup as Runner Up in the Large Boys School category. Well done everyone. Many thanks to Mrs A Brennan and Mr Doran for looking after the team today. 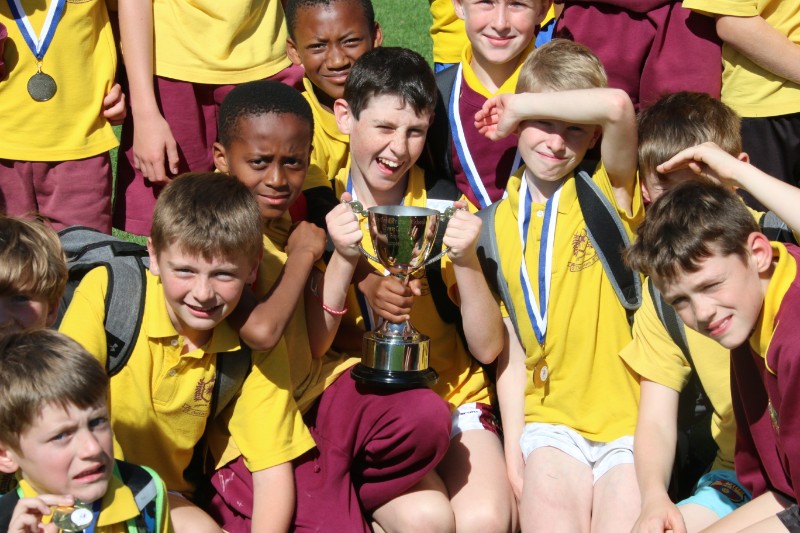 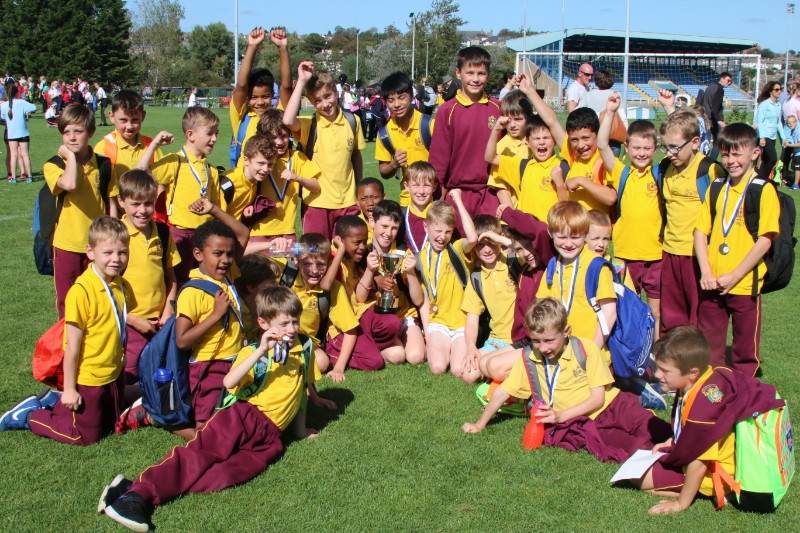